The greatest musicians in the world are rarely in it for the money. However, tour vans and studio time do not come free, so it certainly pays to be able to monetize music in some way or another.

Today, the majority of a modern musician’s income is made from paid performances, selling merchandise, and earning streaming royalties. Whereas CD’s, tapes, and vinyl are a thing of the past (except for the collectors out there), in 2022, most people listen to their music through a handful of online audio streaming platforms.

As many streaming services are low-priced and even free, this leaves many music lovers wondering how much the artists they listen to actually earn whenever one of their songs is streamed.

We’ve compiled a chart, which contains everything you need to know about music streaming royalties and payouts as of 2022. 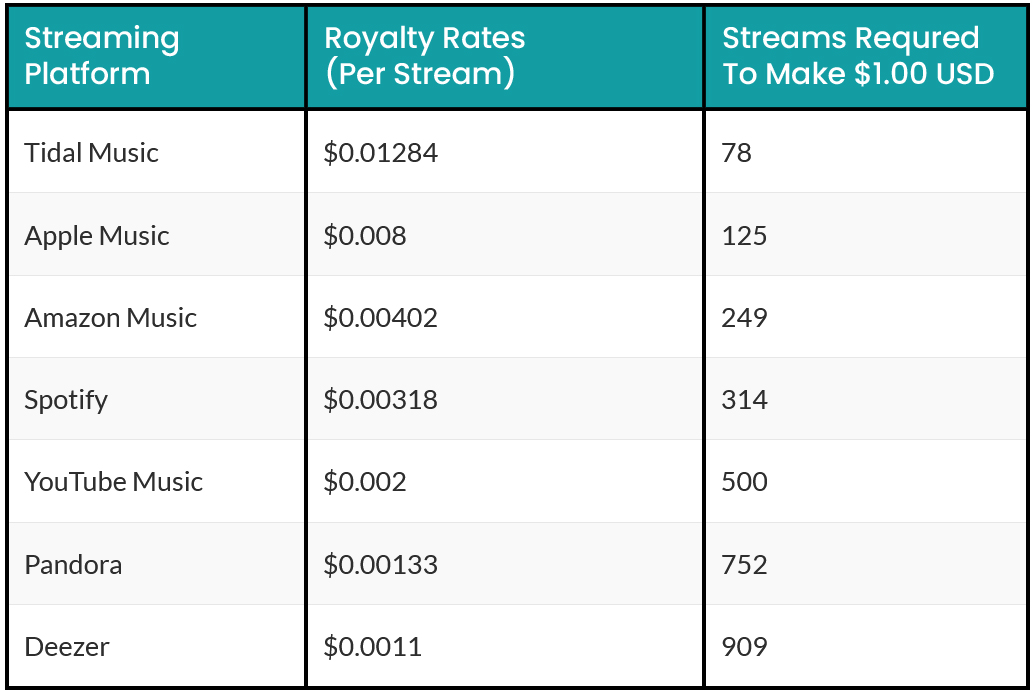 In 2021, Statista reported that the number of streaming service users reached 487 million, marking a huge increase from 7.9 million in 2014.

Music streaming worldwide accounted for $13.4bn, with the country with the highest share of music subscriptions being Mexico.

In the United States alone, revenue generated by streaming services totalled $4.6bn in 2021 with 82.1 million Americans subscribing to a music streaming platform.

The most streamed genre was reported to be R&B/Hip Hop.

If your favorite artist’s next hit song reaches 10,000 plays on Spotify, they will receive roughly $40 in streaming royalties. Although this number is fairly accurate, calculating the exact payout from various platforms can be very difficult.

While music listening habits have dramatically changed over the past ten years, the platforms and methods used to accommodate the internet age is an ever-changing landscape. After many illegal software programs paid nothing at all to artists, today’s top music streaming platforms are finding ways to pay artists through musical royalties.

Although a fraction of a penny may not seem like much, popular artists are still able to make passive income from music royalties while their recordings are played across many different platforms. As royalty collections are now one of the largest financial streams in the music business, artists and consumers continue to utilize and test different streaming services pay models so that everyone involved is fairly compensated.

Get the latest from Firm Biz about the Business Behind The Bag.

We use cookies on our website to give you the most relevant experience by remembering your preferences and repeat visits. By clicking “Accept All”, you consent to the use of ALL the cookies. However, you may visit "Cookie Settings" to provide a controlled consent.
Cookie SettingsAccept All
Manage consent

This website uses cookies to improve your experience while you navigate through the website. Out of these, the cookies that are categorized as necessary are stored on your browser as they are essential for the working of basic functionalities of the website. We also use third-party cookies that help us analyze and understand how you use this website. These cookies will be stored in your browser only with your consent. You also have the option to opt-out of these cookies. But opting out of some of these cookies may affect your browsing experience.
Necessary Always Enabled
Necessary cookies are absolutely essential for the website to function properly. These cookies ensure basic functionalities and security features of the website, anonymously.
Functional
Functional cookies help to perform certain functionalities like sharing the content of the website on social media platforms, collect feedbacks, and other third-party features.
Performance
Performance cookies are used to understand and analyze the key performance indexes of the website which helps in delivering a better user experience for the visitors.
Analytics
Analytical cookies are used to understand how visitors interact with the website. These cookies help provide information on metrics the number of visitors, bounce rate, traffic source, etc.
Advertisement
Advertisement cookies are used to provide visitors with relevant ads and marketing campaigns. These cookies track visitors across websites and collect information to provide customized ads.
Others
Other uncategorized cookies are those that are being analyzed and have not been classified into a category as yet.
SAVE & ACCEPT